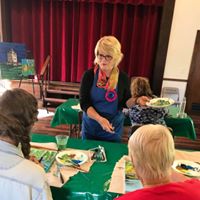 Cindy Lyons is teaching several acrylic painting classes in 2020
We are grateful for the support of our instructors who share their time and talents with the Les Cheneaux Arts Council.  Thanks to them, we are able to provide a variety of classes and workshops to enrich the summer experience within our community.

Many are local artisans in the Les Cheneaux area and sell their work in local shops, or through their websites.  We hope you will consider taking a class with one of these talented artists!
LCAC Instructor Bios 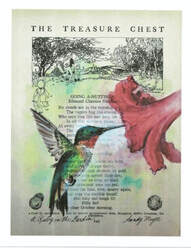 Sandy Meyer's Watercolor Challenges
Michelle Colangelo spends her time between Les Cheneaux and Metro Detroit and has been a summer resident of Cedarville since childhood, when she fell in love with the rugged natural beauty of northern Michigan. That beauty has inspired her creative work, including a long career in professional event planning and instructing workshops.  She started with teaching scrapbooking workshops in the early 2000s, then added other elements to her work, such as card design, sign making, home furnishings, and other wood projects through Rustic Workshops, which she launched in 2016. Michelle specializes in working with wood, and often collects and repurposes wood from Les Cheneaux and the city of Detroit to integrate into her projects. In addition to sign making classes, she instructs in making home decor such as bottle openers, leash holders, and more.

Heidi Finley, a newcomer to Sault Ste. Marie, MI, is an oil painter and Marbling Artist.  Heidi teaches art part-time at Lake Superior State University and is active in arts on both sides of the St. Marys River.  Using tools and materials very similar to those of historical artisans, Finley delights in sharing the traditional craft of Marbling on Paper with students of all ages.

Marbling saw its heyday as a skilled trade in Europe during the 17th and 18th Centuries, and can still be seen on the covers and inside pages of antique books. Finley discovered marbling in 2007  while working on her Master of Arts in Studio Art at the University of Saint Francis in Fort Wayne, IN. "As a painter, I am drawn to the stunning patterns and endless color combinations afforded by marbling" Finley says.

With the help of a virtual store, www.marbledgoods.etsy.com, Finley offers her marbled papers, products and supplies for sale to collage artists, paper collectors, book artisans, etc. around the world.

For a video showing Finley's process and a glimpse into your workshop experience, search Heidi Finley Marbling on youtube.

Diane Keighley, for the most part a self-taught fiber artist, has been a knitter since childhood and over the years expanded the scope of work to include crocheting, needlepoint, quilting, Norwegian Hardanger embroidery, spinning and felting, rug braiding, making soap and body butter, and most recently eco printing.
Diane has had several of her Hardanger designs published and has won awards for her knitting.
Many of her colorful braided rugs are displayed in her Cedarville home.  Diane is the president emeritus of the Greater Boston Knitting Guild.

Cindy Lyons I love playing with paint and color.  It’s fun to layer acrylic paint with a palette knife and watch the magic of the medium take form. Shades of blue and green are my favorite!

As an experienced commercial artist and graphic designer, I have enjoyed the freedom of breaking away from the world of registration and exact measurements to bringing design elements to life on canvas. Creativity comes from my soul. A piece of my soul is left on each composition.

Born and raised in Jackson, and now living in Tecumseh, Michigan in the winter, I have spent summers on Coryell Island since childhood. I love the water, the cedars, the rocks, and the friendly people of the Les Cheneaux Islands.​

Sandy Meyer is a nationally recognized artist who has exhibited in more than 300 national & regional competitions, frequently winning awards for her work. She has had more than 40 one person exhibits in Illinois, Iowa, Indiana, Michigan and Missouri. She also conducts watercolor workshops in the Midwest states.

​Articles about her watercolors have appeared in The Artists’ Magazine, American Artist Magazine, Watercolor Magic, and Watercolor Magazine. Other publications include these books: The Artistic Touch 5 by Chris Unwin, and Splash 15 by Rachel Rubin Wolf.

Her works are in the permanent collections of several collections, including the Illinois State Museum, the Springfield Missouri Art Museum, Evansville IN Museum of Arts & Science, and Mitchell Museum in Mt. Vernon, Il.  In 2000, her work was also included in the exhibit “Millennium Women Artists” at the National Museum of Women in Arts in Washington D.C.   https://sandyartmeyer.blogspot.com/
www.facebook.com/sandy.meyer.334491

Ron Paquin is an elder of the Sault Ste. Marie Tribe of Chippewa Indians and a member of Eagle Clan. He is a gifted self-taught artist who specializes in traditional native crafts. He is especially known for his full sized birch bark canoes, as well as his storytelling, his work in black ash, antler carvings, porcupine quill boxes, dream catchers, and jewelry. He has been awarded numerous awards and commissions throughout the nation, produced museum pieces, and taught demonstrations around the state. His book, NOT FIRST IN NOBODY’S HEART, and his prolific art works reflect his interesting and diverse talents. A glimpse of his work is at http://www.museum.msu.edu/s-program/mh_awards/awards/2003RP.html

Linda Schepperly started working with clay after retirement, with her primary focus being ceramics designed for daily use.  While living in Florida during the winter, she is a working artist at The Potter’s Studio where she focuses on wheel throwing, hand building and coiling.  She is an active member of the Arts & Humanities Council of Charlotte County, Inc and Les Cheneaux Area Artisan Cooperative.  She lives with her husband, Chris on Marquette Island during the summer months where she has a small studio.

​Sue St. Onge is a member of the Sault Tribe of Chippewa Indian and currently works as a Youth Services Coordinator through the Sault Tribe. Sue’s hobbies include Natural Medicines, Natural  Soap Making, aromatherapy, writing and painting.   Sue is also the Drama coach at the St Ignace Area Schools and strives to provide opportunities for area youth to express themselves in creative endeavors.  Sue conducts cultural workshops for the Ojibwa Museum in the summer.  Her past workshops have been on Native gardening, the medicine wheel, dream catchers, leather work, traditional medicines, and jewelry making.   ​

Sue’s daughter Helena assists her with workshops.  She is 12 years old and likes to spend her time being creative, playing ball, and hanging out with friends.